The Blog Interviews continue today, and it promises to be another day of fun, facts, and ... probably a little fiction.

We are interviewing E. M. Zanotti from The American Princess 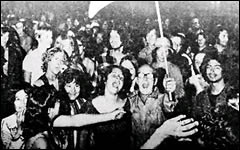 How do you hope to change the definition of the word feminist?

A great goal of mine is really to change the way conservative women are viewed. The term "feminist" has been owned for too long by the Birkenstock-wearing, granola-eating, man-hating crowd. There are women that are both empowered and feminine.

Girls are growing up without strong women role models. The popular culture has pushed a model on them that is, instead of being liberated, is more concerned with sex—is, in fact, defined by it. To me, feminism is about choice—the choice to be who and what we want to be, without fear of hitting a glass ceiling or being made to feel like crap. Feminism is about the ability of women to follow their dream or their calling, not about being indistinguishable from men, or better than them.

For me, the role of women is one of interdependence, aside from independence. Women are able to exist on their own, certainly, but they can't truly be happy. Men and women, instead of being exactly the same or irreconcilably different, belong together, fit with each other, and complete each other. Building a wall between the sexes destroys the interdependence that should mark the relationship between the sexes.

Also, I think I want to send Britney Spears and Christina Aguilera to a remote island where they can never harm anyone ever again.

Is it Conservative Princess or American Princess? did you change your mind in mid-stream, or is it that you've become one of them hippie lib-chicks?

I would guess the next question would be why E.M. and not Emily? I have no idea. Originally, the blog was supposed to be totally separate from my real life, and I didn't want people Googling my name and finding it. Now, I go by either. I chose E.M. because of G.E.M. Anscombe, a famous Catholic feminist from the early 1900s. Emily is totally cool, though, since that's what Michelle Malkin calls me when she links to me.

Not that I'm biased to her, or anything.

What's your favorite dish to prepare?

Cake. Any kind of cake, especially chocolate. I can eat whole cakes in a sitting.

Why do you avoid the standard smiley face convention when signing your name? Example: :o)

I don't like the smiley face with the dash-y thing in the middle of his face. I wouldn't want a dash for a nose, and it just looks like he has a giant scar, or a had really bad plastic surgery or something. The "o" looks like a nose.

I really don't like clowns, and this smiley looks suspiciously like a clown. Maybe its my subconscious trying to work that out.

Who is scarier: Sissy Spacek or Richard Dawson?

Oh, gosh, Sissy Spacek. Especially early Sissy Spacek. Like that movie, Badlands. I hated that movie. I saw it on a second or third date with an ex-boyfriend, and I spent the entire time making fun of it. I just couldn't handle her. She looks like she's been sucking on lemons without sleep for three days. And that hair....ugh.

I suppose my mom and dad, though they are both Italian, ones a hippie, and the other would kill me if I released that picture of him in a crown.

Where do you find true meaning in life?

In my friends. I find true meaning in my friendships. I spent a long time searching for happiness and meaning in really lame relationships, trying to substitute in other stuff. I realized that having people around me who like me, even though I'm crazy, and a freaky right-wing nutjob, and dress funny, was the most important thing in my life. Having people who accept you is incredibly important, since you find happiness in accepting yourself, and having people who reaffirm who you are, and like you anyway is really powerful.

If the moon, suede shoes and violets are blue, what color is paradise?

Who is your favorite character from Robin Hood?

The Sheriff of Nottingham. There is no more capitalistic, Republican-y character in all of literature.

I pray in the evening, right before I go to sleep, laying in bed. I like to just talk to God—its not so much praying: I do that during the day, when I need a moment to myself, or to really relax. When I really pray, I just let things go, communicate with the Universe the way that I would with anyone. Its seems so much easier to just talk to God the way that I would talk to people, only with the understanding that while I'm doing it, He's understanding. Getting to a point in my religion where I can just trust in Him has been a big deal for me, but coming from Hinduism and Eastern Philosophy, my concept of God is much more accessible than the typical Christian one.

I really believe that conversation with God is the only way to really put stuff in His hands.

As for what I pray for? Mostly for the ACLU to suddenly implode so that all of my pending cases against them will result in summary judgment in my favor and I won't have to write those legal briefs that are due on Monday, and can instead finish this interview.

In Ann Arbor, when it first gets warm enough, when you have that very first hot day after the spring—it usually comes in April or May—all of the fraternities hang the Bob Marley banner out and are playing reggae from their porches. Its kind of a cool thing to walk down the street and hear "One Love" with the sun shining, the wind blowing and the sky a deep clear blue. Its really a feeling of happiness.

Why are you a Catholic?

I like Catholicism because its so pure, and because it doesn't make apologies for the beliefs. Catholics, real Catholics, understand that their belief is the purest form of Christianity: the meat and potatoes.

I was a Catholic at birth, then left the faith, turned to Eastern philosophy, and from there, after getting a good hold on the basics of universal thought, came back to Christianity. Once I had that down, I picked up some writings of John Paul II. He was amazing at conveying the beauty of Catholic teachings in a way that I could understand, mainly because his beliefs about the Catholic faith were similar, or may have even taken their root in the same Eastern philosophy that I loved so much. Every time I read something he wrote, I didn't feel like I was being preached to, I only felt like, wow, this is the way its supposed to be.

Being in a very Catholic community, Ave Maria School of Law, and working within the Ave Maria Foundation, has really solidified my beliefs, because my friends and my coworkers and my fellow students are all examples of great faith and understanding. Because of their support, I've really grown to love not just Catholicism, but the Catholic way of life, the Catholic devotion to family, and the spirit of the Catholic faith. I have been amazed at the kindness and beauty of so many Catholic people, that I don't think I would for a moment question that this is precisely where I am supposed to be.

I love Spongebob. I have no idea why. We have very similar personalities. That might be it. And we both have very strange pets.

Who's your favorite author?

Jane Austen. I love her novels: the women in them are really strong, very accessible, and very smart, but they don't act like a bunch of bitches, and they don't try to make men look like a bunch of retarded monkeys. The women in those books are the equal to the men, in almost every way, yet they maintain their femininity, and their female dignity. They don't need any kind of outward manifiestation of respect, they just understand its there.

Plus, any guy who acted like Mr. Darcy would automatically be hot in my book.

What is the secret to staying sane if you are on the go all the time?

If you asked someone who knows me about me, they would probably be like, oh Emily? the girl that doesn't sleep, right? Its not all that outside of reality. I love public interest law so much, that it doesn't feel like work—I'm fighting the good battle on the front lines—so sometimes, the whole law thing takes over—so I don't get burned out all that often. But the blogging thing...now that...

Really, I think the secret to staying sane is to not take yourself so seriously that you forget to live your life. I have friends who are some of the best at that—even last night, two went in costume to see Pride and Prejudice, one dressed up in full pirate dress for Halloween, check out the croquet pics on my Flickr site, etc.—and they help me to get out of nutty lawyer-mode and back into reality. Or, sort of reality. You'd be amazed at what one afternoon being silly can do for your psyche.

What is the biggest mystery of all?

Why does my dryer eat socks? And why can I never find really nice beige shoes? Why do hippies smell? Why hasn't The Love Boat come out on DVD?

The Patridge Family or The Brady Bunch?

The Brady Bunch. Hands down. There is very little that I value more than "Sunshine Day," and a great pair of bell bottoms. The Partridge Family kind of creeped me out a little. No family is that happy. If your family is that happy, its because SOMEONE is on drugs. There is no way, also that Lauries hair could ever reamain that straight for that long. There had to be some humidity somewhere.

Also, Davy Jones happened to appear on the Brady Bunch. I have a May-December crush on Davy. I danced with him once at a concert.

I think we all learned a lot today. And I know I had a good time! We hope you did, too.

Thanks again to E. M. Zanotti, The American Princess, for taking the questions today.

Next week, we have Harvey from Bad Example and The Blogging Babes from The Cotillion. That promises to be another great weekend of interviews.
By Basil at 11/12/2005 09:00:00 PM