It's a special weekend of interviews. Yesterday, we had Jack Yoest. Today, it's Charmaine Yoest of Reasoned Audacity...

Our questioners are all set to go... 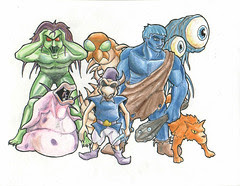 Toby Keith or the Dixie Chicks?

No shock y'all: Toby Keith. If I had any Dixie Chicks albums, I would have gotten rid of them. But Toby would've won anyway.

Who would you like to run for President and Vice-President?

If Condi would come to Jesus on pro-life, I'd work my fingers to the bone for her. I like George Allen - he used to be my governor. Otherwise the GOP field is looking a little thin to me right now. I may have to become an Anyone-But-Hillary girl . . .

Who is your favorite musician?

Helena Yoest. You'll have to wait about 10 years for her first album, but it will be worth the wait.

I hate to give the same answer as Jack. . .but it's got to be Reagan and Lincoln. Although depending on the day, I could go with Washington, an undervalued President. He could have been King, but he insisted on giving us our democracy.

Of the news shows on which you've appeared, which was the most fun?

I've got to go with Politically Incorrect. Always profane, huge stress-test, but really interesting people. One of my favorites: Jason Alexander - really smart and funny, even in person.

Where would you like to live when you retire?

I don't want to ever retire. I pray God gives me the endurance to keep going till I drop. . . .but if I were dreaming, a view of the ocean while I was typing would be nice.

Is a tomato a fruit or a vegetable?

Who cares when you've got the chocolate food group?

What is your favorite passage of scripture?

My grandfather always signed Proverbs 3:6 after his name: "Trust in the Lord with all your heart, and lean not unto thine own understanding. In all thy ways acknowledge Him, and He shall direct thy paths."

It's a lot harder to do than it sounds.

What is your favorite Cartoon and why?

I always liked Wonder Woman as a girl, so what I want to know is when did she go over to the Dark Side? She's working for NOW now. But why do they get to have her?!?

What is the best decision you ever made?

Marrying Jack and having five kids.

What is the worst decision you ever made?

Shouldn't February just be eliminated and its days dispersed among the remaining months so we have 33 days in every month except January?

Hah. You don't fool me. Just like a guy: trying to avoid Valentine's Day. . .

Do you want your children to be involved in Politcs?

They are already all little political activists. If our blogs are obsessed with politics, it's possible we are worse in real life. They've grown up working the polls on election day, doing lit-drops in the neighborhood, going to rallies, fund-raisers and conventions. They all show a fair amount of enthusiasm for it. They were all intensely interested in the Bush 2004 campaign, and tried to stay awake for the election results. Our older son once insisted on calling our moonbat Senator about a particular issue. I could see him going into politics - the girls all have other gifts and interests that I think will lead them in other directions.

What is your favorite Disney movie?

Teddy Roosevelt. Margaret Thatcher. All four of my grandparents - especially my grandmother who is still alive.

What's the worst Christmas gift you ever received?

A toddler throwing up all over my Grandmother's couch on Christmas Eve.

How fast can you run in high heels?

I'm a kick-the-heels-off and run barefoot kind of girl. Whatever it takes to get there.

Thank you so much for agreeing to the interview. Anything you'd like to add?

Thanks for the fun questions and for reading Reasoned Audacity!