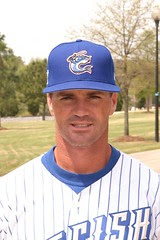 And Baseball America has tabbed him as "Best Managerial Prospect in the South Atlantic League" in the August 14-27 issue.

The Skipper of the Catfish is in his second year in Columbus. He managed many of the current players in Odgen, UT for the Raptors of the Pioneer League.

He's a lot more laid back ... or seems so ... than the Catfish previous manager, Dann Billardello (now Minor League Catching Coordinator for the St. Louis Cardinals). If Travis gets into an argument with an umpire, something serious has happened.

The players I've spoken with that have other pro skippers to compare to really, really like Travis Barbary, as a person and as a manager. And, so does Baseball America, it seems.

Oh, and a former Catfish player was recognized by the magazine, too. Sergio Pedroza, now with the Tampa Bay Devil Rays organization playing for the Visalia Oaks of the California League, was named Best Power Prospect.

And I can't omit that MinorLeagueBaseball.com had a nice write-up on Travis Denker's performance last night and of late for the Catfish.

Despite being on the edge of elimination from the playoffs for this season, the Catfish are being recognized for the talent that they have ... and have had ... this season.
By Basil at 8/18/2006 01:08:00 PM