The Columbus Catfish won their 9th game in a row tonight, before having their streak snapped in the second game of a doubleheader Friday night. They also honored one of their most loyal fans between the games.

The doubleheader was made necessary by the postponement of Thursday's game because of field conditions. The first game, scheduled for 7 innings, actually went 9 when the teams were tied at 2 at the end of the 7th. With the Charleston Riverdogs (Yankees) leading 1-0 in the bottom of the 2nd, RF Lucas May singled in CF Bridger Hunt, who had walked, tying the game at 1.

It stayed that way until the bottom of the 9th when, with 2 out, 3B Juan Rivera singled, moved to second on Bridger Hunt's single to left, then scored when SS Ivan De Jesus singled to right field, giving the Catfish a 3-2 win.

De Jesus and May each had 2 hits for the Catfish. P Doug Brooks pitched the final 2 innings and won his 1st game of the season. He's not allowed an earned run in 5 appearances since joining the team.

In the second game, a 5-hit 3rd inning by Charleston did in the Catfish. The Catfish took a 2-1 lead in the 2nd when 3B Eduardo Perez scored on a wild pitch, then C Conor McGeehan scored on RF Chris Jensen's single.

In the 3rd, 4 straight hits, capped off by Charleston 2B Jeff Beachum' triple, gave the Riverdogs a 5-2 lead. The Catfish narrowed it to 5-3 on Eduardo Perez's sacrifice fly that plated SS Ivan De Jesus. Charleston pushed across another run in the 4th, giving them a 7-inning 6-3 win.

P David Pfeiffer took the loss, his 5th this season. 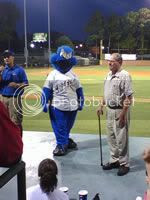 Mr Mack Night
Between the games, the Catfish paid tribute to one of their most loyal, if not the most loyal, fan. Robert McKenzie, longtime Columbus baseball fan, was recognized by the team for his support over the years, including his efforts with the young fans at the games. "Mr. Mack" has always been a fixture at the games, but always stayed in the background, never seeking any recognition for what he's done. He has not escaped notice, and the Catfish named the night after him.

"Mr. Mack Night" saw the Columbus Catfish win their 9th game in a row, the most since moving to Columbus. It's quite fitting that his night saw them reach such a winning streak.

Special For Me, Too

In addition to seeing Mr. Mack get his recognition, I had another thrill tonight. One of a selfish nature. The Little Princess made the trip from Athens in time to make it to the second game. Though she didn't get to see the win, or the recognition of Mr. Mack, she did get to join the Wife and me, and the grandchildren, and a niece and nephew, and her boyfriend, behind home plate for a game.

We stayed for the "run the bases" event for the kids, and enjoyed the fireworks afterwards.